Skip to the content
Home » Money » The Penny Challenge

A while ago I received a nice email from Jeannie...

I am forwarding an email I received from you last year that actually helped me get my "saving" game on really good. I think the visual of the actual "jar" with the title Penny Challenge made me realize that maybe I can do this. I found a jar and created my version of the label and began the quest. Colleagues at work made fun of me, saying "those gimmicks never work" but I was determined and told them "just wait and see".

Six months into the Penny Challenge, I decided to make things a little more easy for myself and began to save $20 per week for the rest of the year. Ultimately I saved $800 from this challenge and will be continuing to save from here on in 2017.

For anyone who might even have a little doubt that they cannot save since they live paycheck to paycheck, the Penny Challenge can definitely be a start and once they are consistently on the game each week, their thought pattern will change. I guarantee it!!

Please share your Penny Challenge once again, to help another like me who would give it a try. Maybe you'll get another email like this in 2018 🙂
***

I regularly get emails similar to that one and so, here are some simple money saving ideas for the new year...

A friend got me started on a fun project a few years ago and it continues this year...

Each week we are putting money in an envelope.

Sunday is our day to fill the envelope.

At the end of the year we'll have $1300+ and the plan is to spend it on something we want...not for debts or bills.  Something fun.

$52 on week one, $51 next two etc. since money is tighter at  the end of the year AND this would be one of those goals that get easier!

Here's another option for saving money... 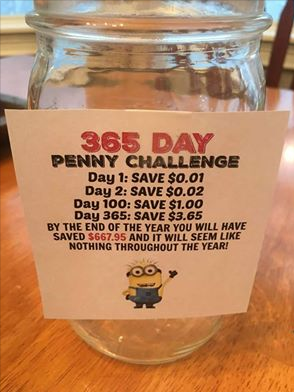 Someone named Lynette Washer posted that on her Facebook feed and I liked the idea.

It occurred to me that putting a penny in the jar for every day of the year is easy now but a few months down the line it might be a hassle coming up with the change every day.

For that reason I figured out the weekly amount for the penny challenge.... (turn on images if you don't see it) 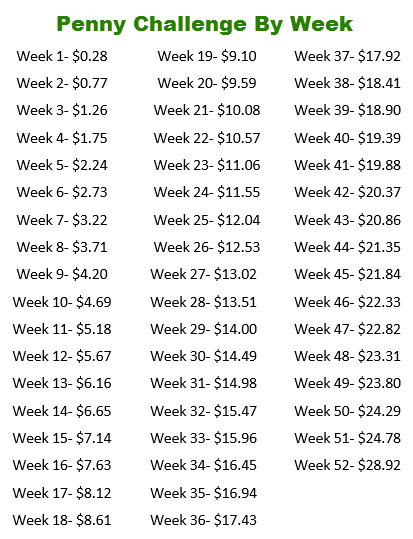 If you want an average, if you save $13 a week, you'll accomplish the same.

If you have a spare $20 at the moment, you could drop that in your jar and be "paid up" till early March but I think doing something at least each week is better for developing the habit.

Another idea is to save every $5 you come across this year.

Pretend $5s don't exist and put them away till the end of the year when you should have a nice supply!

Do you have any similar money games you'd care to share that I could pass on to my readers?  Please leave a comment.